I’ll condense all the progress to date in this one post. I had a set of running posts over on http://woodbarter.com as progress was made. We’ll start with a shot of the empty garage.

Shortly after this shot was taken the garage was filled with stuff from moving. It took quite a while for the house stuff to come inside. As well as a lot of the outside stuff got moved over to the single car side of the garage.

Eventually I was able to get things moved around enough to start the transformation. Those steps were moved and a platform added. The intent is to put a sink next to the door so I can wash things up (like myself and paintbrushes) outside without causing an issue in the house. 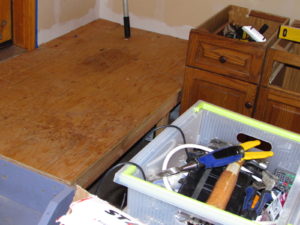 We picked up a nice set of oak cabinets and I installed some of those. I had to build a set of angled runners to put down on the floor in order to keep the cabinets level.

Here’s my new air compressor with the packaging on it still.

The table saw is in it’s final position. I built an outfeed table on the back side and adapted my router table to be the right wing of the saw to save space. Plus it gives me a fence for the router as well.

Hard to see here, but under the outfeed table will be more storage in the shape of drawers.

Dust collector is in it’s corner. There will be a wall just to the left of it and I’ll also enclose it in order to cut down on the noise.  You can see the painted wall here. The ceiling hasn’t been painted yet and, to be honest, it may be a while before I get around to that.

Here are a couple more shots of progress. I built a shelf for the TV and the sound bar. I added a secondary shelf for the tablet. Just run Pandora on the tablet and I can listen to music out there. The freezer has now been moved over to the single car side so it’s out of the shop.

Yesterday I built the wall between the shop and the garage. They’re actually separate spaces now (although at the moment the separation is more notional than actual.)

A couple more studs need to be added. The plan is to fully enclose the dust collector with a door to the right so I can service the air filter as needed, a door to the left (out into the garage) so I can take out the drum for emptying, and a pegboard wall on the top in order to allow for air circulation.

That’s where I am now.

My next step, once I finish the wall stuff, is to start on the electrical so I can use my table saw. There are a few things I have to build and the saw is essential to those. Since it’s 240v I need to get the subpanel installed and wires run. I can still run individual hoses for the dust collection at the moment.